A sobering reality: Narcan doesn't always reverse heroin overdoses. That warning from the Monmouth County Prosecutor’s Office following the recent death of a Wall Township man who police were unable to revive with the opiate antidote.

"You can't go into this thinking, well someone is going to save me if I overdose because they have Narcan now. It might just not work," said Charles Webster, Spokesman for the Prosecutor's Office. 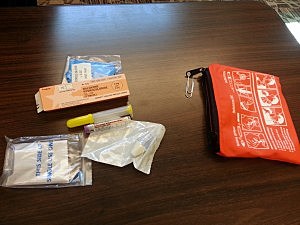 On a more positive note, Webster said since police departments in Monmouth County started carrying Narcan Kits two months ago, there haven't been any repeat abusers. However, he added, police involvement ends once a person receives treatment at a hospital. "We're really not tracking what's happening to them. We're hopeful they're getting the help they need, but it's just not something we're following right now," he said.

The victim who overdosed August 6 was the 25th person to need the the overdose reversal drug since Monmouth County Police Departments began carrying Narcan kits two month ago.

Wall Township police found the unidentified man in a residence with no pulse and not breathing. He was taken to Jersey Shore University Medical Center in Neptune, where police said he died later that day.

“This man’s death serves as a reminder that naloxone is not a cure-all for heroin addiction, and is by no means a 100 percent fail safe alternative to reversing the effects of a heroin overdose,” Acting Monmouth County Prosecutor Christopher J. Gramiccioni said. However, he pointed out that Narcan has saved two dozen lives.

Narcan was first used on June 5, 2014, in Ocean Township, less than four hours after Monmouth County First Assistant Prosecutor Marc C. LeMieux was joined by members of the Monmouth County Police Chief’s Association to announce the deployment of the overdose antidote.

To-date, Narcan has been administered 26 times by law enforcement officers across Monmouth County reversing the effects of the heroin overdose 24 times. Since Narcan was deployed with law enforcement officers in Monmouth County, 7 females and 19 males have received the overdose antidote – all but one reversed the effects of the overdoses. The Borough of Belmar is leading the way with overdose reversals at five, closely followed by Middletown with four reversals and Keansburg with three reversals, according to the Prosecutor’s Office.

“A heroin overdose is serious business, and not something that can be taken lightly by users who are thinking Naloxone will save the day, because although Naloxone is a life-saver most of the time it is not a life-saver all of the time,” said Monmouth County First Assistant Prosecutor Marc C. LeMieux.

In April, Monmouth and Ocean counties were designated by Governor Chris Christie as the pilot programs for deployment of Narcan with law enforcement officers. By the end of the month, a designated training officer from every law enforcement agency in Monmouth County, including the law enforcement entities at Brookdale Community College and Monmouth University, were trained during two train-the-trainer sessions at the county police academy. Those trainers were tasked with returning to their respective departments to train the patrol officers in using the overdose antidote.

In Monmouth County, between 2011 and 2013, the rate of people who died from heroin and prescription opiate abuse is three times the number of homicides and highway fatalities combined, according to the Prosecutor’s Office.